From Cruelty to Understanding: Trends in Special Education

For thousands of years the disabled were abandoned, left to die.

Today: 96 % of children with disabilities are educated in regular public schools in the U.S.

Timeline:
Ancient Times:
1552 BC: earliest reference to intellectual disability dates to the Egyptian Papyrus of Thebes.
800 BC: The ancient Greeks and Romans thought disabled children were born because the gods were angry.
FACT: Disabled children were abandoned and left to die
For hundreds of years…..

NOT Politically correct but true:
The words moron, imbecile, and idiot were once acceptable clinical terms in medicine and psychiatry for intellectually disabled people.
• Moron: was a person with an IQ between 50 and 70. They could benefit from education and support themselves.
• Imbecile: IQ between 35 and 49. These individuals could be taught basic social behavior and eventually learn to care for themselves.
• Idiot: IQ of less than 35. Severely impaired and totally dependent on others for their survival.
Colonial America: parents had few options other than to educate their children at home or pay for expensive private education.
1776: A founding father, with disability signs Declaration of Independence
FACT: Stephen Hopkins, a Declaration signer with cerebral palsy, upon signing, said “my hands may tremble, my heart does not.”
1779 – Thomas Jefferson proposes a two-track educational system, with different tracks for “the laboring and the learned.”
1817 – The Connecticut Asylum at Hartford for the Instruction of Deaf and Dumb Persons opens. It is the first permanent school for the deaf in the U.S.
FACT: 7: number of students in the first class. By end of the first year, 33 students.
1829 – The New England Asylum for the Blind, opens, the first school in the U.S. for children with visual disabilities.
6: Student enrollment in year one.
60: Enrollment by 1839.
1851 – The New York State Asylum for Idiots opens with 20 students.
1869 – Boston creates the first public day school for the deaf
Before 1975: many disabled children were denied access to public school,

• By 1969: More than 1 million children with disabilities still excluded from schools.

1975 – Landmark legislation. Children with disabilities have the right to attend public schools, and learn in regular classrooms with non-disabled children. Law known today as IDEA (the Individuals with Disabilities Education Act).

1990: The Americans with Disabilities Act (ADA) is enacted.

2001: No Child Left Behind. Law calls for all students, including students with disabilities, to be proficient in math and reading by 2014.

1983: 1 of 5 children with disabilities were educated in a regular school.

2012: NOW, thanks to IDEA, 96 % of children with disabilities are educated in regular schools.

50: percentage of students with disabilities that spend at least 80% of their day in regular classrooms.

3X: College enrollment rates among students with disabilities have more than tripled in the last 20 years.

2X: Special education teaching force has more than doubled in the last 20 years.

• With budgets tighter, and fewer teachers, program reforms needed
• Use of technologies, iPads, Apps to aid teachers
• Maximizing the meaningful interaction between students with disabilities and their non-disabled peers

Modern Day Villain: Sequestration (2013)
• 5% reduction in federal funding of the Individuals with Disabilities Education Act (IDEA)
• Many schools will have fewer speech, occupational or physical therapists
• Many schools will have fewer social workers and school psychologists
• $579 million cut from IDEA Part B, which supports students age 3-21 with learning disabilities, speech or language impairments, intellectual disabilities, autism or emotional disturbances.
• 300,000 students receiving special education services affected
• Federal share of funding states for special ed programs falls to 14.9%, the lowest federal contribution by percent dating to 2001.
• More than 10,000 special ed teachers laid off in 2012, due to sequestration
• $900 million (devoted toward students with special needs) could be excluded from future funding propositions: Arne Duncan, Sec. of the Dept. of Education.
Question: Thousands of years after Plato, are we REALLY treating special ed kids any better than the Greeks and Romans would have? 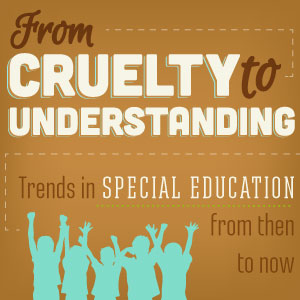