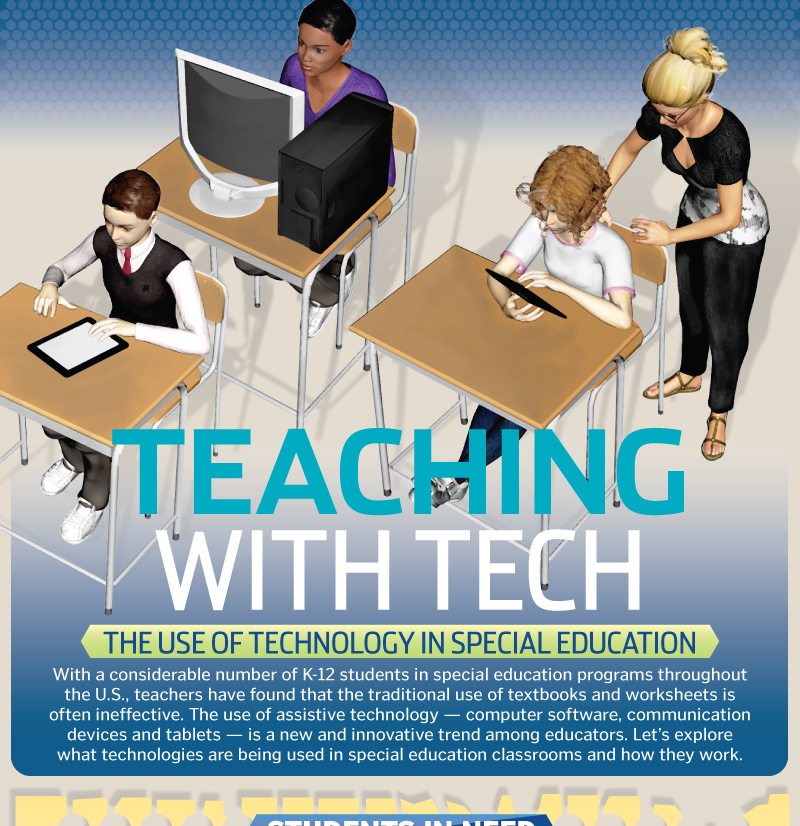 Share this infographic on your site!
Students with speech delays, autism, cerebral palsy and down syndrome have found new ways to express themselves, thanks to modern technology.

A Brief History of Children with Special Education Needs

Before the 1800s: Persons with physical and mental disabilities were targets of discrimination across cultures for thousands of years. On virtually every continent there are records of isolation, exclusion, and even destruction of persons with disabilities. :

1918: Compulsory education laws passed. But many children with disabilities were routinely excluded from public schools.

1954: Brown v. Board of Education extended equal protection under the law to minorities, and paved the way for similar gains for those with disabilities

1975: Public Law 94-142 is passed, requiring public schools to provide an education for students with a broad range of disabilities – including physical handicaps, mental retardation, speech, vision and language problems, emotional and behavioral problems, and other learning disorders.

1990 and 1997: Public Law 94-142 is reauthorized and renamed, the Individuals with Disabilities Education Act (IDEA).

6 million: number of children, OR 10 percent of all school aged kids, that receive special education services.

$44 billion: of that $51 billion, the estimated cost to state and local school districts

15: percentage, on average, of the cost to educate special education kids paid out by federal government.

Percentage of Students by Disability (Ages 6 to 17)

Then, Now and the Future

Technologies used in classroom to help with challenges include:

Multimedia technology is being employed in the classroom to help with a variety of challenges from hearing and vision loss to limited physical movement.

Laptops and netbooks have become a low-cost option for the classroom. Students who struggle with a pen and pencil find new opportunities to express themselves on the computer.

Voice Recognition Technology: For those students who are still challenged by the physical keyboard, voice-recognition technology has greatly improved, often reaching 98% in simple text documents. Can be used to replace keystrokes in a document as well as control the overall computer. Most of this software “learns” as the student speaks to it so the results become even more accurate.

Text-to-voice: available on computers and many eBook readers, this software scans text and reads it back to the student. This is helpful to the seeing-impaired student but is also useful to the student who needs the audio reinforcement of the words they are reading.

Touch screen: there may be no need for a physical keyboard. Tapping on a tablet screen with a finger or stylus will give the same results.

Devices to help the hearing impaired:

Devices to help the visually impaired:

Grace: designed for students with autism

Psychological benefits of these new technologies:

Special technology can make it possible for a student to stay in his or her class instead of being sent to a special program away from his or her friends and peers.

Students with severe learning disabilities can still benefit from technology to advance their learning. It can allow them to communicate with others in ways not available to them before.

Students have less anxiety and frustration, and a feeling of accomplishment.

Technology In Special Education from guestc3d215c 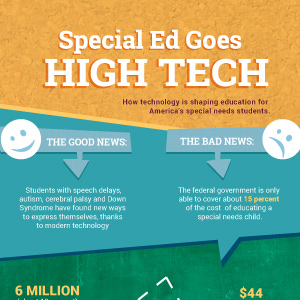