Attention deficit hyperactivity disorder (ADHD) is a problem of not being able to focus, being overactive, not being able control behavior, or a combination of these.

1980: The Manual of Mental Disorders defines “Attention Deficit Disorder, with or without hyperactivity”, thus distinguishing between ADD and ADHD, and listing “inattention, impulsivity and hyperactivity“ as essential features.

Some children normally have trouble focusing and behaving. Children with ADHD do not grow out of these behaviors. The symptoms continue and can cause difficulty at school, at home, or with friends.

FACT: While ADHD can’t be cured, it can be successfully managed.

There are 3 different types of ADHD

• Fails to give close attention to details or makes careless mistakes in schoolwork, work, or other activities

• Has difficulty sustaining attention in tasks or play activities

• Does not seem to listen when spoken to directly

• Does not follow through on instructions and fails to finish schoolwork, chores, or duties in the workplace

• Has difficulty organizing tasks and activities

• Avoids, dislikes, or is reluctant to engage in tasks that require sustained mental effort (such as schoolwork or homework)

• Is often forgetful in daily activities

• Fidgets with hands or feet, or squirms in seat

• Runs about or climbs excessively in situations in which it is inappropriate (in adolescents or adults, may be limited to subjective feelings of restlessness)

• Has difficulty playing or engaging in leisure activities quietly

• Blurts out answers before questions have been completed

• Interrupts or intrudes on others (eg, butts into conversations or games)

FACT: In most cases, ADHD is best treated with a combination of medication and behavior therapy.

Medication: Several types can be used to treat ADHD

2. Nonstimulants were approved for treating ADHD in 2003. This medication seems to have fewer side effects than stimulants and can last up to 24 hours. FDA-approved non-stimulants include: Strattera, Intuniv (for individuals, ages 6-17), and Kapvay (for use alone or in combination with a stimulant to enhance effectiveness).

3. Disclaimer: Before using any drug, check first with your physician.

1. Create a routine. Try to follow the same schedule every day, from wake-up time to bedtime.

2. Be organized. Put schoolbags, clothing, and toys in the same place every day.

3. Avoid distractions. Turn off the TV, radio, and computer, especially when your child is doing homework.

4. Limit choices. Offer a choice between two things (this outfit, meal, toy, etc., or that one) so that your child isn’t overwhelmed and overstimulated.

5. Simplify: Use clear, brief directions to remind your child of responsibilities.

6. Use goals and rewards. Use a chart to list goals and track positive behaviors, then reward your child’s efforts. Be sure the goals are realistic.

7. Discipline effectively. Instead of yelling or spanking, use timeouts or removal of privileges as consequences for inappropriate behavior.

8. Help your child discover a talent. Find out what your child does well — whether it’s sports, art, or music. It can boost social skills and self-esteem.


ADHD and school: Tips for teachers

• Use a homework folder for parent-teacher communications

• Be sensitive to self-esteem issues

• Involve the school counselor or psychologist

About 1 in 10 children (aged 4-17 years): have been diagnosed with ADHD at some point in their lifetime OR, about 5.4 million children in the United States.

About 1 in 20 children in the U.S. have ADHD symptoms.

4.1: percent of the U.S. adult population with ADHD.

41.3: percent of diagnosed adults have severe symptoms. This is equal to approximately 1.7 percent of the total U.S. adult population.

Boys are diagnosed with ADHD at more than double the rate girls are.


We Shall Overcome: Famous People who have overcome the stigma of having ADHD

1. Justin Timberlake: The Grammy-winning singer said he has “ADD mixed with OCD”

2. Celebrity chef Jamie Oliver: Had ADHD as a child, but he told the Celebrities with Diseases website that healthy eating helps him manage it.

3. Will Smith: Growing up, he was the fun one who had trouble paying attention. Today, he would’ve been diagnosed with ADHD.

4. Olympic champion swimmer Michael Phelps: His mom described her son’s exhibition of classic ADHD symptoms: not sitting still or being able to focus.

5. Actor Jim Carrey remembers coping with his ADHD by being the class clown, and said it’s “hard for me to come down from what I do.”

6. Richard Branson: Virgin Founder has ADHD, but that hasn’t stopped him from owning a major airline, sending tourists into space, or building an underwater plane.

7. Paris Hilton: Takes Adderall to manage her ADHD, which she’s struggled with since she was 12.

8. Howie Mandel: Comedian and judge on America’s Got Talent, recalls not being able to focus or sit still in class as a kid, but he wasn’t diagnosed until he was an adult.

9. Terry Bradshaw: Former NFL quarterback has ADHD, and struggled even as a child.

WOW: People with ADHD are 300% more likely to start their own company.


Misconceptions: ADHD is not caused by

1. Eating too much sugar

2. Watching too much television 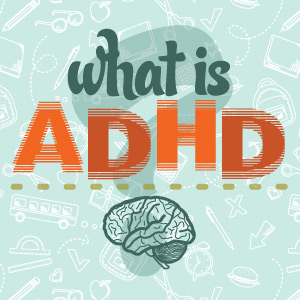